On 30 December 2018, AGKFan640 celebrated it's 5th anniversary, with a video greeting uploaded on it's channel.

On 25 June 2019, AGKFan640 uploaded it's final episode of her AGK Series. She officially retired from AGK. 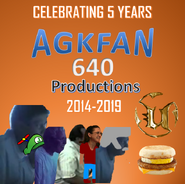 Leopold Slikk in the Computer Repair Shop at Episode 10

Leopold, his Family, and Falcon Punch Guy in the Zoo at Episode 15

Leopold and the Broken Nintendo Wii in Episode 16

Leopold in the Jail Cell in Episode 16

Leopold in the Bed in Episode 13

Leopold's Halloween 2018 Costume
Add a photo to this gallery

These are her wallpapers she made and you can use it to your Computer, iOS, Android, PSP and PSVita.

Squidward
Add a photo to this gallery

Retrieved from "https://agk.fandom.com/wiki/AGKFan640?oldid=140131"
Community content is available under CC-BY-SA unless otherwise noted.