"I live in Paris with my mother until I can live elsewhere in order to have a better life. But with all these issues that I'm having so far I'm stuck.. I work in a grocery store (looks like "Publix" or "Target" in USA) 5 days out 7 Generally speaking, I started the videos in 2008 on the theme of video games, fun fact, my very first AGK video dates from January 9, 2011 : "Angry German Kid goes on YouTube" But this video has been private for its very low quality and deadly boredom reasons. Of course, other better quality videos are circulating to another alternative YouTube account. The reason for making AGK videos is to revive an old meme from over 15 years ago and make better parodies so far. I used to do little AGK parodies which were minimalist but effective. When I met xAgk on Discord, he had helped me a lot to promote my content and I thank him very much, and joining the AKM allowed me to have more friends. I would like to meet these people so that I can get to know them well (But the coronavirus says : "NO." Seriously -_- ...) Also I translate my AGK Episodes into French and then into English and attract French and English people, But I'm not a great translator I guess.."

He is the 27th member of the AKM Family.

A funny meme, and adventurer

Lazy and a gamer 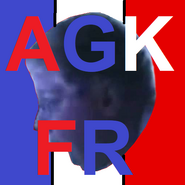