Alexis Sancia Kizumi (アレクシス・サンシア・木済 ;Arekushisu Sanshia Kizumi) is a 15 year old girl who likes to be with her cousin Sebastian Taito, be with her friends, use social media, and more.

Born 1 year after her older cousin, she loved to watch Dora, Barbie, My Little Pony, and other girl shows when she was little. Sebastian has been very close to her throughout their lives. They met a German kid, but because of his attitude at the time, she didn't like him, neither did Sebastian until 2014. Later on she and Leopold started getting bullied by another kid who acted much worse. Her older cousin had to threaten the bully revealed to be Stephen Quire to make him stop bullying. She has gone through depression and anxiety in the past due to being bullied back in 2015.

Alexis is an energetic and very caring teenage girl with many friends who care about her. Alexis loves being with her cousin Sebastian since he's been with her throughout her life. She likes to use social media like Facebook, Instagram, Snapchat, and TikTok, watch Spongebob, iCarly, Pokémon series, etc. She also loves songs by Ariana Grande and BTS. She gets quite stressed out during quizzes, tests and reading, much like Sebastian. Alexis prefers to make herself look very cute around others due to having anxiety over planning to look sexy in any way possible.

Alexis has pink hair (usually in twin tails), pink eyes, and wears a blue, purple, and pink dress, striped pink leggings, and pink shoes. She also has black and pink butterfly wings attached to her back.

AGK In BND of Doom's Camping 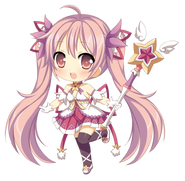 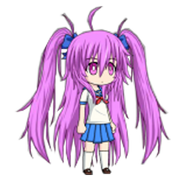 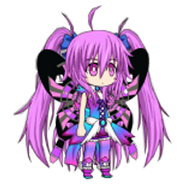 Official 2019 Look 2
Add a photo to this gallery

"Give me a break!" - When Alexis gets frustrated or doesn't want to deal with stuff she doesn't like.

"OOF!" - When Alexis hears something crazy, stupid, or unamusing. (Similar to Sebastian)

Retrieved from "https://agk.fandom.com/wiki/Alexis_Kizumi?oldid=139354"
Community content is available under CC-BY-SA unless otherwise noted.