Angry Sulu Kid is a character who mostly appears in GeneBernardinoLawl's AGK series.

He was giving the fan name of "Kervin Neinatterson". He first appeared on the episode "How AGK get the super keypower". It revealed that he has a rabbit teeth due to his mother is a bunny.

So far in Silver Panther 2000's AGK series, He made a cameo in episode 2, he will soon make a full appearence in episode 7. Kervin Neinatterson is also a Tritagonist in this series.

So far in Shiyamasaleem's AGK series, He was giving the fan name of "Todd Smith", he will soon make a first full appearence in season 3: episode 3: Angry German Kid VS Angry Sulu Kid.

In his series, he is become an Leopold's enemies due to copying Leopold on his original video. He is appears in Episode 31. 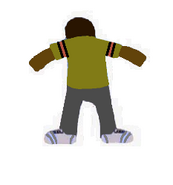