A Backpack (also called Rucksack, Knapsack, Packsack, Pack) is, in its simplest form, a cloth sack carried on one's back and secured with two straps that go over the shoulders, but there can be exceptions. Lightweight types of backpacks are sometimes worn on only one shoulder strap. In some AGK Parodies, Leopold Slikk, and other characters are shown to wear backpacks. It is most often used as a receptacle to hold items, although in some parodies, it is just for decoration. 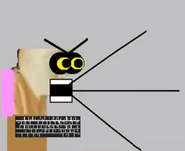 Leopold with his black backpack on The Paper Mario Super Show.

PGK with his signature backpack.

PGK's back sprite with backpack.
Add a photo to this gallery
Retrieved from "https://agk.fandom.com/wiki/Backpack?oldid=101594"
Community content is available under CC-BY-SA unless otherwise noted.