Berlin is the capital city of Germany. In several series, it is where Leopold Slikk lives.

Leopold and his family, also Jake and his family live in a fictional city named Berlin, located in Pokémon region Kalos. It is a large city, like in Margaretka4356's AGK series, but it has only 20,668,314 citizenship and there lives a lot of Pokémon too. And unlike her series, streets are called normally "street".

In her series, Berlin is a fictional city, which is in Germany, near Mannheim. People speak here every language, even English and German. It is a large city, which has population 45.291.427 citizens. Streets are called "strasse", like in Germany. Famous adresses from this city: 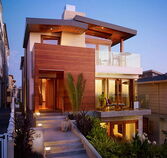 416 Strandstrasse, Eddie's house.
Add a photo to this gallery

In his series, Berlin looks like new york, but the street names are different.

Berlin features as the main setting for the current season of the series. Leopold and his family live in Berlin, and he goes to school in Berlin as well, led by Principal Gestalt. Leopold has to travel around Berlin trying to avoid his parents, and more importantly Arceus and his followers, Dialga, Palkia and Giratina. Jake Randolf also lives in Berlin.

Retrieved from "https://agk.fandom.com/wiki/Berlin?oldid=141434"
Community content is available under CC-BY-SA unless otherwise noted.