“I I have retired from AGK for now...”
―BlueNewton

BlueNewton is a AGK parodist since April 2015. He makes parodies with Leopold being good instead of him being grounded.

He makes AGK parodies on mobile devices with iMovie and Cute Cut Pro, which are his main video making programs.

BlueNewton became inactive in Febuary 1st-May 12 for unknown reasons but then returning back to the community.

Episodes in italic are cancelled.

These are his wallpapers he made and you can use it to you computer, IOS, and PS Vita.

FNAAGK 4 wallpaper for your computer

The villains of BlueNewton's AGK Series

Ed, Patrick, Fluttershy (Note: BlueNewton is NOT a brony) 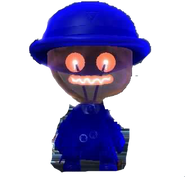 BlueNewton was however inactive from February 1, 2016 for many reasons. He didn't announced his inactivity but he had to be inactive for the rest of the month to February - May 12, 2016. Many of his friends contracted him but he didn't respond during the past months. On May 13, 2016, He made a return back to the community and recently apologies to the community back after when they were worried for him.

BlueNewton recently started his comics and posts them in G+ and in DeviantArt. His comics were Leonard and Leonidas goes to the multiverse (comic edition) and The AGK Movie 2: The return of Dark Leopold (comic edition).

BlueNewton recently has lack of creativity which progresses him having no ideas or having boring creativity to work on.

According to a post, BlueNewton decide to retire AGK as his official announcement which states this is now his last AGK picture of Leopold moves on to a new journey.