“Stop Calling me mister. I have a name, the name's Captain PS.”
―Captain PS introduced to Carl Clover

Captain PS (real name Peter Sundler) was the secondary protagonist of the AGK Series. An original character created by a youtuber pauladrian360. He is a parody of Captain N and Captain S of the PBC Series but with different appearance from the other video game characters (Such as Jak, Leon, etc.).

In Episode 20, Peter wears a plain white t-shirt, a black and white tights w/ Playstation logo on his trunk, an oversizes sunglasses and has brown baldric belt on his upper similar to Jak. He sports a brown undercut hair similar to Leon from Resident Evil.

In Episode 21 to 26, his plain white t-shirt was added with black accent and he replaces his oversizes sunglasses with windproof sunglasses. he also has a space suit which is based on Isaac Clarke's Arctic Rig from Dead Space 3 w/ a white Playstation logo in Episode 25.

In Leopold and Peter Show he wears casual clothes.

Peter is a kindhearted person to his team including Leopold and represents a heroic nature. During his conversation with Leopold in Huerta Memorial Hospital, Peter also loves video games mostly on Playstation Console (in which is why his name was Captain PS).

Weapons from Ratchet and Clank

Captain PS was a member of PS Team and worked as a bartender in Episode 20 he was also a friend of Jak which he mention in a first place despite Leopold doesn't know him yet. He later help Leopold and return to save the Haven City. His past life was unknown.

In Episode "Let's face the Baron" He became a close friend to Leopold after the fight with Baron Praxis.

He appears in Leopold and Peter Show he only referred himself as Peter Sundler than Captain PS this was because he doesn't play Playstation.

In AGK in the Future Christmas Special, he finally got a PS4 w/ 2 games Assassin's Creed IV Black Flag and Battlefield 4.

In Episode "The Fegel Alliance" he was revealed to be Fegelein's friend. He also convince Fegelein how to perform Antics like he did.

He appears as a cameo in Hitler Pros and Cons about him.

Captain PS made a solo appearance during the Ice Bucket Challenge, challenging Harold Slikk, Micky Lazlo as well as AGK Makers and Untergangers such as TheKewlOne96, TheAGKMisadventures, AlphaSkyRaider, Staedty86 and AKO675.

Captain PS Made an appearance in Angry German Kid Trilogy. He was going to appear in the future series before he closed his account.

Captain PS appears in his series. He was a member of Angry Gang. 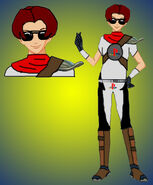 Captain PS using Shiroe as a base.

Captain PS wallpaper with a Playstation XMB as a background.

Retrieved from "https://agk.fandom.com/wiki/Captain_PS?oldid=143473"
Community content is available under CC-BY-SA unless otherwise noted.