The John Show is a webseries created by Collaterale1 and premeried on Youtube in 2011 and still goes on, it was later rebooted with full episodes uploaded on Vimeo due to the original being shitty. The plot revolves around John, who fights numerous amounts of villains while having a normal life setting in the City of Nowhere. The plot is very similar to the Angry German Kid series, especially Icepenguins101's series, despite not being related to AGK.

Title Card of Ep. 1 - John's Monster. A homage to the original poster of 1931's Frankenstein. 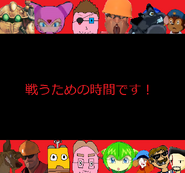 Title Card of Ep. 6 - Bizarro (Which translates to "Fight to the Death!")

Title Card of Ep. 6.5. - Horror Mansion
Add a photo to this gallery

Retrieved from "https://agk.fandom.com/wiki/Collaterale1/The_John_Show?oldid=143287"
Community content is available under CC-BY-SA unless otherwise noted.