Making AGK Episodes with CyberPods and other Characters!

CyberPod Mark 2 is an parodist who started in 2014 and retired on 2015, He started to remake his Downfall parodies and rebooting his AGK Series in 2015. It's spin off of Atarster Series such as Angry German Kid Show before Atarster was retired in 2017. He took care of Atarster's Series to make a new Story of Angry German Kid to fight against new main villain is Jebediah Brightman.

He even makes his own series such as The Angry Dominican Kid Show. It is more like Atarster Series.

NOTE: Some characters appeared only once in the series.

Sequel from the finale in Atarster's series

After Leopold has defeated Arthur.exe, He takes a rest after he met CyberPod in Episode 2. Now he is gonna fight against new villain is Jebediah Brightman for taking over the world. Few days later Leopold has discover the Shield Generator which CyberPod was live there over 20 Years ago. The Shield Generator was builded by The Terran Alliance in 1998.

After all Here is comes the Disciples force. They want the Earth to be destroyed. So CyberPod would save the earth from Disciples.

CyberPod Mark 2 derived his power from the yellow sun of Earth. Forced under a red sun akin to that of his homeworld of Krypton, CyberPod Mark 2 rapidly lost his powers, reverting to the stature of a normal robot. Artificially-created red sun radiation had the same effect although depending on the amount, it can do anything from either completely depriving CyberPod Mark 2's of his powers or just weakening him.

Aside from red sun radiation, CyberPod Mark 2's main weakness was Kryptonite, radioactive shards of his destroyed home planet. Exposure to Kryptonite would rob CyberPod Mark 2' of his power and cause him great pain, and prolonged exposure could kill him.[45]

CyberPod Mark 2's only other known weaknesses were magic and power draining, which could injure him as easily as it can any other being. In fact, CyberPod Mark 2 seemed even more vulnerable to magic than an average human, even with powers. In addition, CyberPod Mark 2 would display an intolerance to electricity-based attacks but this would vary depending on opponents and given circumstances. 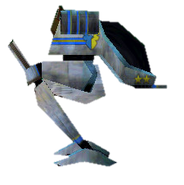 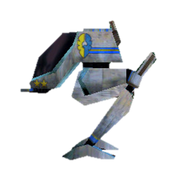 CybePod Hanging out with his big brother Mark 3

CyberPod flying over the city

The First Shield Generator was builded in 1996.

The 2nd Shield Generator was become more bigger than the first one in 1997.

The 3rd Shield Generator has been Completed in 1998