In Episode 84, he tries to force Leopold to play Basketball with him. Leopold refuses, starting a fight between the two. Leopold, as always, wins the fight. Bowser and Princess Peach thank Leopold for defeating Darth Vader.

In The Pilot Episode, he sends the original trailer for Sonic The Hedgehog to Leopold's computer. Leopold hates it, and the prank message ends up giving Leopold a Blue Screen of Death.

In Episode 1, he is ordered by Emperor Palpatine to send more prank messages to Leopold's computer. This ends up backfiring, as Leopold gets his revenge by sending Vader and Palpatine a scene of the infamous Lightspeed Ramming scene from Star Wars: The Last Jedi. Palpatine, enraged by what he just saw, leaves the room while Vader asks where he's going. That's all for his appearance.

In Episode 9, he along with Palpatine and Grand Admiral Thrawn send a bunch of scary McDonald's videos to Leopold before sending him a message about surrendering to the Galactic Empire. Leopold tells them that he won't surrender. He is then told that they will send enemy after enemy to Earth so that they can kill him. And if all else fails, then that's when they invade Earth. Palpatine ends the message by playing Mexican music on Leopold's computer, which wakes up his family and gets him grounded for staying up late.

Darth Vader With His Lightsaber 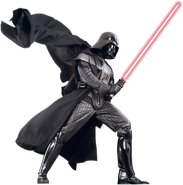 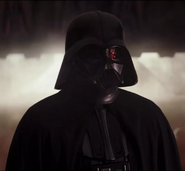 Vader in Rogue One

One of Vader's iconic moments

Vader is also enemies with Hitler

Vader before he turned to the Dark Side

Vader without his mask

Darth Vader's birthday in MrSolarSun's AGK Series is April 19th. The same as Hayden Christensen; the actor who played Anakin in the Prequel Trilogy.

Retrieved from "https://agk.fandom.com/wiki/Darth_Vader?oldid=144040"
Community content is available under CC-BY-SA unless otherwise noted.