Angry German Kid Wiki
Register
Don't have an account?
Sign In
Advertisement
in: Stubs, Articles with possibly unconfirmed information, Articles without any citations,
and 7 more

This article is about the character from GeneBernardinoLawl's series, you may be looking for the game.

Exetior Slikk made an appearance in Episode 60 "AGK and Hoppus react to the trailer of Fabrice's AGK series" as regular Leopold, where they witness how Leopold died in the alternate universe. Although he is saved as seen in the trailer, the following episodes prove otherwise...

He first appears at the end of Episode 63 "AGK's Great-Grandpa", where he introduces himself to Springtrap. Dave, mistaking him for Leopold, tries to attack him, but fails. Exetior laughs at him, and calls him "weak rusty killer". He then asks him to join him, so he can kill Leopold and Tailsko.

In Episode 64 "AGK meets Angry Polish Kid", he takes Springtrap to his world. There, he reveals that he originally was Leopold until he died at the hands of Raynare. He then suggests that they should team up with the Evils, so they can corrupt the world they live in.

At the beginning of Episode 66 "AGK's Sore Throat", Exetior tells Barry Charles to recruit Springtrap in "The Evils" and reveals that unlike everyone else, he knows they are being controlled by what he calls "the Man behind the Screen" and offers to team up together to destroy Leopold Slikk. In the episode, he disguised himself as Leopold in order to make his friends believe that his sore throat has been cured. However, Hoppus noticed blood on his shirt, and remembers what he had seen in Episode 60.

He comes back in Episode 68 "AGK's Babysitter", where he takes the form of a Highest and possesses Oswaldo the Penguin. After a harsh fight, the demon left Oswaldo's body and swears revenge on Leopold before disappearing. He jumpscares the viewer at the end of the episode, indicating that he is not gone.

In Episode 60, Fabrice mentions him to Adrenaline21 that he'll fight Exetior Slikk after he became a spirit. In the secret ending of "Road to Power Up & Final Mix", Fabrice returns as a robot made by Alvaro and Fegelein to find him.

In the crossover movie by Adrenaline21, Exetior Slikk joins into "Team Valkyria" to eliminate any members from "Multiverse Alliance" after Valkyria used "Universe Merger" to start his plan (Multiverse War).

More will be written soon... 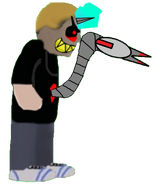 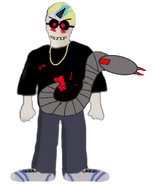