Being a guitarist on his own band

The person who beats up Leopold, and his brothers if they make him angry

Harold Slikk was born in Germany, 8 January 1965. At his childhood, he was usually heard any metal and rock musics on his radio also he asked to his parents if the poster that contains any metal and rock band that sticks on walls of buildings that around from his city. In the concert, he asked again to his parents that he wanted to be a guitarist on his own band but his dad told him that he wasn't know about playing guitar. Later, He surpassed his skills when he shown to his dad in his teenage age. Several years later, Harold married with the girl named Gladys that he didn't know about her that she was on concert since his childhood. At 1990s-2000s, Harold and Gladys had 3 sons named Leonidas (1995), Leopold (same as Leonidas), and Leonard (2003).

Now, Harold still a guitarist from 2000s unnamed bands he had after the birth of Leonidas, Leopold and Leonard also he has violent attitude to them if they do their annoying activities and ignoring his commands.

Harold has his good personality since his childhood. Calmful as his emotions goes upwards (usually happens if Harold isn't annoyed), Cheeful when he's going to concert or playing his guitar on own house, Careful with his family, Easily angry (if the bullies around his school), Serious if he's on adventure (comic ver. only)

In both comic and animated series of AGK, Harold usually angry when he's home if Leopold or his siblings are trying to annoy him. (Season 1)

Harold's role is a replacement to Judy, Nick, Steve, Jade and Zoey in comic series while he has minor role in animated series along with Leonard, Leonidas and Jack (Season 2 & 3).

This guy will take the fat officer Harold in Icepenguins101's AGK Episodes of AGK: Remastered Show.

*Note: This Harold is completely opposite than other Harold that any AGK Parodists taking before. 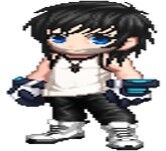 Comparison to his fat counterpart in AGK Series

References to The Grim Adventures of Billy and Mandy

His name was taken from Billy's Dad on The Grim Adventures of Billy and Mandy.