Hermann Fegelein, the Master of Antics, is the apprentice of Heinrich Himmler, the Grand Master of the Antic Order. He uses his antics to drive Hitler crazy. He is Immortal to everything, and can't die no matter what. He can survive in everything, including explosions, and even black holes.

In episode 72, he and Leonard infected the Terminator robot Mrs. Sukscox with a virus, shutting her down for good, then he uses his Fegel-teleport to disappear from Jake Randolf's house after helping Leopold.

Besides Hitler, Fegelein also has teamed up with Leopold against Justin Bieber. In Trilogy(Episode 36-38) and Movie 2.

In episode 16, he and Hitler's crew went to Weegee Theaters to see "The Darkest Hour" 3D, but Leopold gives a free ticket to Fegelein for Mission Impossible: Ghost Protocol to annoy Hitler.

He is also Leopold's best friend

In his series, Fegelein is a part of the Slikk Family along with Traudl Junge.

Future Fegelein appears in Episode 26 "The Fegel Alliance". In his series, he is a friend of Peter Sundler (Captain PS) and aid them against Hitlesis ambush. He also have a sister named Jamie. 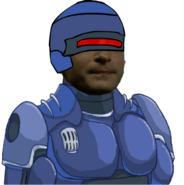 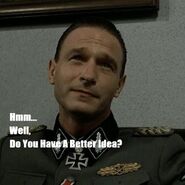