In "AGK vs Fabrice" Episode, Hoppus appeared to stop Leopold and Fabrice fighting, then help Leopold to finish him.

In "AGK and Leorich vs Leonard" Episode, Hoppus appeared to help Leopold finish Leonard from preventing him killing either Leopold or Leorich after they pranked him before, chasing Kyle but failed, being hugged by Leopold and Leorich, called "rabbit slut" for 1st time.

In "AGK vs Fabrice: The Aftermath" OVA, there's a scene about Leopold and himself being slaved by Madrice from 40T10's Nightmare. The majority of scene, Hoppus is just normal like ever was.

In the 2017 Halloween Special, TBA

In "AGK Lost in Space" Episodes, Hoppus turned into a sexy bunny girl and still called "rabbit-slut" again by Leopold and Adrenaline21, later he turned back into his original form with a genderswapping machine after defeating the villains with Leopold's crew.

In AGK vs Warriors for Hire, to be continued...

In "AGK and Friends vs Springtrap and Kyle" Episodes, to be continued...

In "AGK vs Nazis" Episodes, Hoppus being kicked out by Adolf Hitler as annoying "rabbit slut" to ruin his Fuehrerbunker.

In "AGK: Powered Up" Series, Hoppus appeared to be major protagonist as he's a member of The Germans.

In after credits of Season 4 and Season 5 episodes, many screams of him can be heard and the episode list will be on here:

*Note: This is violent bumper joke of this series.

He's not appearing on this series and only mentioned by Leopold which used on Judy Hopps, every her appearance.

Before this movie starts, "AGK vs Grizzly Bear" Episode occured as he and Norman Warrior (father of Vambre and Prohyas Warrior) teamed up with Leopold. 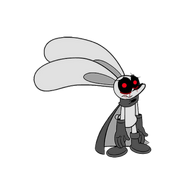 The sprite of the enslaved version of him. (used soon on GeneBernardinoLawl's Mighty Magiswords creepypasta "DePrEsSeD RaBbIt")

Gaia Online version of him 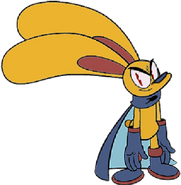 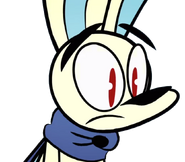 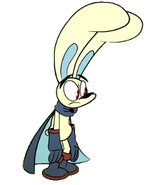