Joey Slikk is a character who first appeared in Episode 6 of Joey Slikk's AGK Series, He likes cookies, pizza and burgers. He drinks water, Sprite, fruit punch, and Iced Tea. One of his favorite games were Warpath Jurassic Park, M.U.G.E.N, and Neopets (on some occasion).

The character's design has been criticised, parodied and mocked due to its weird anatomy, drawing in MS Paint, primarily because his body and shoes resemble boxes (often referred to as a cereal box and tissue boxes, respectively), and that his head resembles a massive lemon. Recent iterations of the character have the edges of his body and shoes curved to make them appear more rounded.

Going to summer school, being called a cereal box, getting dislikes, people hating him. 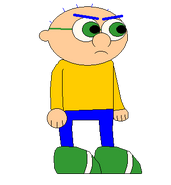 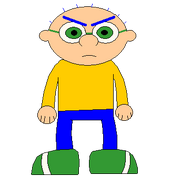 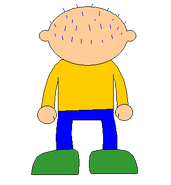 Sprite of Joey Slikk (Back)

An Alternate Version of Joey Slikk that appears in some episodes from Joey Slikk's AGK Series.

Joey Slikk's Walking Animation
Add a photo to this gallery

Retrieved from "https://agk.fandom.com/wiki/Joey_Slikk_(Character)?oldid=108484"
Community content is available under CC-BY-SA unless otherwise noted.