Kaeru Otoko (lit: "Frog Man") or "The Angry Japanese Kid" is a character who made his first major appearance in Tank202100's AGK series [1]. He has appeared in many other AGK series since then, under multiple names:

He has the same abilities as the Angry German Kid but in a different manner, mostly being wound up over DVDs instead of video games.

In Illuminati 91021's AGK Series, his voice will never use the audio from the video, because her audiences are Japanese and she doesn't want anyone to say that he is angry at DVDs.

In TheLuigi755's AGK Series, the AJK is a member of the Slikk family. He was originally intended as a replacement for Leonidas Slikk, for whom Luigi could not find a voice. However, starting from the 2nd episode of the new series, both Haruki and Leonidas appear at the same time, sharing a classroom.

In Lordimertelo2231's AGK Series, he is actually against Leopold.

In BlueNewton's AGK Series, He says his new fan made name is Atour Outer in his series.

Atarster's first use of the AJK was in AGK Episode 27: AGK Meets the Angry Japanese Kid.

Kaeru made his debut in episode 8 as he introduced himself to all (including Leopold and Johnny) in Hitler's class.

In PrinceStickFigure's AGK Series, he appears on the 3rd episode of AGK Rebooted. He is a minor character

In Shiyamasaleem's AGK Series, his name is Takashi Kaeru Hiroshi. He is a ninja and he's also good at martial arts and karate.

In Silver Panther 2000's AGK series, Kaeru is one of Leopold's friends, he first appeared on episode 1

Hariko Jerebeko Lin Jin. Born on 31st May 1998. He is Japanese-Spanish. He helps Leopold alot on S3 Ep2 when Leopold is defeated by Evil Sonic. Hariko helps Leopold defeating him and gives Leopold a First aid kit he also help Leopold troll his father and he helps Leopold and Jake for beating Dark Leopold who possessed Sonic and Hariko gives Dimitri France Leopold's Bully a coal and and a blowing up dynamite bomb with saying "don't ever bullying Leopold again you fucking idiot"

Kaeru was originally a member of The Bastards (Adventures), who later decided to defect to The Slikks in Reloaded to assist Leopold in combat. Like Jake, Kaeru takes out any members of The Bastards whenever he wishes or wants to.

In YumaSonic2016's AGK series, Kaeru is a crazy and intelligent 17-year-old Japanese guy who likes to watch game shows and anime and likes to play Nintendo and Sega video games. Kaeru can be a pervert, mainly when caught looking at ecchi anime or hentai. It's shown that he is curious when looking at traps, lolis, and other anime stereotypes. He could sometimes be rude to Yune and accidentally call her a Loli. He is great at drawing and using technology. Like Jake and Sakura, he can successfully repair any damages using his tech skills. Like Leopold, Yuya, Yune, and Nelson, Kaeru is pretty edgy, but can sometimes get away with his edginess. Kaeru's favorite music consists of Electronic Music, Rap, Vocaloid, Rock, etc. It is also shown that Kaeru often gets into arguments with Ronald and Sakura. It turns out that Kaeru dislikes "Dizaster - Love Me Long Time" because he finds it to be offensive. It's also revealed he once got caught listening to LMLT, then got whacked with a pan by his father and kicked in the crotch by his mother, which could be why he no longer wants to hear that song. 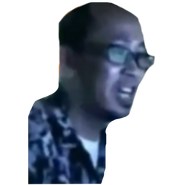 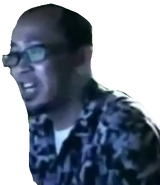 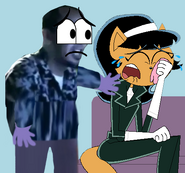 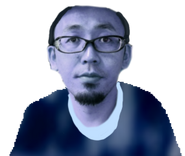 Keuru front sprite I made