He makes he debut in episode 2, he is Leopold's most recent neighbor, later he ends up befriending Leopold. 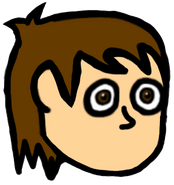 The unused Head design of Kyle

Kyle Sprite with no mouth and eyebrows