Kyle is an Australian koala who is an antagonist only appeared once in We Bare Bears and returned in GeneBernardinoLawl's AGK series.

Kyle is the same height as Nom Nom and look almost exactly like him, only his fur is much darker in color. For the majority of his appearance, he was seen wearing a set of thick, fake eyebrows to mimic a koala shown in Nom Nom's family photo.[1]

In "Kyle," he showed up to Nom Nom's estate claiming to be his long lost brother. They became friends and agreed to live together until Kyle slips up and his eyebrows fall off, revealing that he's just a random koala off the street and just wanted to steal Nom Nom's fortune and mansion. He is wanted by police and arrested in the end.[2]

In the episode "AGK stuck on the bathroom", Kyle escaped in jail and put his eyebrows on. After that, he planned to lock off Leopold in the bathroom.

In "AGK's girlfriend", it is revealed he has become Dave Miller's koala pet. 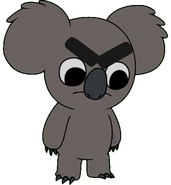 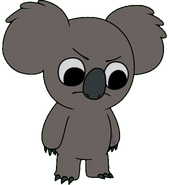 Him without his fake eyebrows by GeneBernardinoLawl