In majority of the parodies, Leonard is a minor-antagonist, when Leopold does something bad to him, he'll always tell his parents about his.

Leonard, despite being an annoyance to Leopold, his parents love him more than their other children, except in certain parodies.

Leonard sometimes plays video games and loves things intended for adults and small babies such as Dora the Explorer, Barney and the It's A Small World ride at Disneyland.

Sometimes Leonard laughs at Leopold when he gets beaten up, if Leopold does something bad do him, and tells on Leopold. In episode 72 he teamed up with Fegelein to shut the robot Mrs. Sukscox down by infecting her with a virus.

Leonard likes to annoy Leopold and he has a much better grade compared to that of Leopold.

In Pokebob1's AGK series, Leonard will laugh at Leopold, his mother and his father. He even beats his brother up. His parents will do anything to protect Leonard, and they always give him something he wants, despite his awful behavior.

In episode 42, Leonard wears a Luigi-like cap with a propeller on it in order to distinguish him from Leopold (only episode to date with Leonard wearing a propeller cap).

It is revealed that he was named after Harold's third cousin, and he was born June 28, 2003. He was briefly married to Dina Hamilton, with whom he had a son, Andrew. (She was run over by a train at a level crossing just two months later.)

Leonard helps Eva Lee to escape The Yuri Mind Control and thankfully, Eva Lee did not become evil. She became friends with the Slikk family and then Leonard gets some hidden message form Sion Eltnam Atlasia. Afterwards, Leonard helps Fegelein.

Leonard told Leopold to stay in the house or he puts a virus on his computer.

Leonard is a clone of Leopold after his mother and father thought he died in a tornado, Leopold knows about this and doesn't tell his brother because clones don't got souls, Meaning that Leonard can't go to heaven when he dies.

In episode 78, Leonard got beaten up by Fegelein because he hates Vivian Chow. Although, he isn't dead, but still alive. He came back briefly in episode 125 to save Leopold so he doesn't get killed. In episode 142, he is killed by NORMHORROR, leaving his brother Leopold alive.

Leonard appears in episodes 8, 9, 10, S2 E7, S2 E8 and will make a return. Leonard HATES Leopold. Leonard is more well behaved, he gets better grades than Leopold and his life if probably better without him. He does like Leonidas though.

Leonard is Leopold's little brother and he is a nice brother to Leopold but he really hates his dad because of chores. He is really funny when he bought too many Mario heads in Scams Department Store and makes funny pranks to Leopold and Harold Slikk. But he really want's to stay home with Leopold because he doesn't go to school like Leopold does.

In BlueNewton's AGK previews of his episode: AGK babysits his brothers, Leonard's school called Mary Slikk that Leonard has attention problems. So Mary Slikk bought him prescription medication for ADHD for his attention problem. Leopold went into Leonard's room and shout his name. Leopold looked at Leonard and he was placid and Leonard however speaks like Stewie Griffin. More info for this paragraph coming soon.

In episode 45's special episode (Comic edition): Leonard asks Leonidas that he was working on a device and asks Leonidas to go to the multiverse. After Leonidas says yes they both travel but however take them both in the Mugman Universe. Leonard explains about the universe. But then Mugman asks them he wants to come but Leonard has to escape into the Mugman universe with Leonidas but Mugman accidentally came with them. Then they arrive to Doodle Toons universe with dat boi and Sheldon, Leonard however explain the Doodle Toons universe and he said who's inside the tea pot. Inside the tea pot was Jellybean, she wanted peace and quite. Leonard possibly have a crush on her but Leonidas asks him if he loves her but Leonard said he's not in love in Jellybean. Then they hear the elephant who makes noises then Jellybean heard the noises so Leonard told Leonidas to run but they jumped on Jellybeans roof. Jellybean rushed outside and ask the the elephant what's he's doing and she wants him to make noises somewhere else. After the elephant walks to a different area, Jellybean heard a voice up to her roof which was Leonidas saying to Leonard again if shes in love but Leonard tells him to be more quite. Then they both looked down and Jellybean looked up and she says hi to Leonard and Leonidas, but Leonard now has a crush on her.

In Episode 23, Leonard wakes up after being knocked out by Leopold on the Chirstmas special, and has a talk with him.

Leonard wears a luigi cap too just like Videoman1443's series, he is in New York, In Episode 18 Leopold was forced to babysit him, Leopold noticed last time when he watched Arthur.exe and got terrified, and so he decided to terrify Leonard. After that, he started crying. Then Leopold got beaten up and grounded. ﻿

His first appearence is Episode 10: he got beaten up by Leopold, but forward to Episode 88: Leopold ruined Leonard's birthday and made him cry, Then Leonard ate icecream (maybe).

His first appearence is Episode 1 when Leorich annoyed him which made Leopold so angry that he decided to beat up the crap out of Leorich. Leopold stopped from Leonard beating up Leorich in order to avoid more consequences. After Leopold talked with Leonard, he and Leorich leaves the living room, leaving Leonard alone. After some seconds,Leonard saw a teleporting hole where a hedgehog Sonic.exe wants to fight Leopold. Leonard prevent Sonic.exe from going anythere so Leonard decided to fight with Sonic.exe, later on Leonard defeated Sonic.exe and wins. After that Leopold and Leorich were listening to OMFG which Leonard hates it soo much and goes insane because it, so Leonard decided to stop them by trying to open the locked door to plug off the Computer. In Episode 2, Leopold and Leorich were screaming,Leonard being insane because of OMFG, he decided to beat the crap out of Leorich! After the beating, Leorich waked up and he called Leonard a Dick, he looked in the window because he was about to saw something suspicious but he didn't see anything!

Leonard Harrison Slikk Born in November 30th, 2005 he trolls his brothers 3 times in a day with his antic skills like Fegelein. He also laugh when he gave his brother a BSOD which it will make Leopold very mad! He also yells and annoys Leopold alot with help of Leonidas. Leonard also had Pepper Spray for blinding Leopold's eyes which it will buy Leonard's time for calling 911 on Leopold for sibling abuse and Leopold cries for the police chasing him down.

Leonard is Leopold's brother that annoys and teases Leopold most of the time. In Episode 62, While Leopold is sounding asleep, he put a CD to install the virus on Leopold's PC. Once Leopold is awake, he wanted to play Unreal Tournament, but it was revealed that the virus appeared on his PC, causing him to get pissed off with it. His first appearance is at Episode 12.

Leonard is Leopold's half-brother who has the personality of an average middle/high schooler from New York City. He also likes to ruin his life with kicking his ass in Unreal Tournament and Team Fortress 2 under the gaming alias "ZaFuckenGayma2007"

Leonard is Leopold's brother, Leorich's older brother, Amir and Amiri's best friend. He hangouts with Amir and Amiri all of the time usely. Leopold babysit him in Episode 23 in Dipsy57_YT's AGK Series. He is friends with Talking Tom as well. But he really hates evil clones so much in Episode 77. In Episode 94: Leopold vs Roys Bedoys.EXE Part 3/3, They were in the Arcade and his older brother, along with Leorich, Amir, and Amiri beat the living crap out of themselves. He really hates Barney Error videos along with Preview 2 Minions videos.

Leonard Is Leopold's Brother Who Is In Same Class

He Is Leopold's Half Brother

He Is An Elementry Schooler

He Is Leopold's First Brother

Leonard Slikk in Sesseur's AGK series. The character with the green hat was used for Leopold Jr. Slikk.

Leonard Slikk from YouTubeWare, the helicopter hat is animated! (The sprite will change soon...) 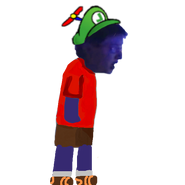 An updated version of Leonard Slikk from YouTubeWare (A better design)

Leonard's back sprite by Joey Slikk.

Leonard Slikk Walking Front View made by UsefulVideos (Sorry if it looks terrible, he tried his best) 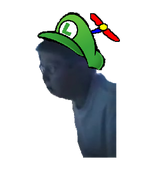 A Remaked Version of the Leonard Slikk Front Sprite made by Useful.

Side sprite from the seasons 4-5 of GeneBernardinoLawl's AGK series

Front sprite from the seasons 4-5 of GeneBernardinoLawl's AGK series

Back sprite from the seasons 4-5 of GeneBernardinoLawl's AGK serie 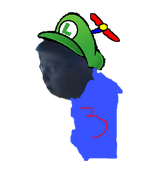 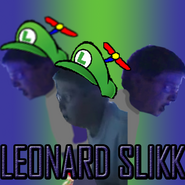 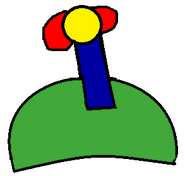 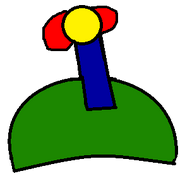 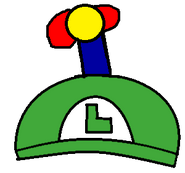 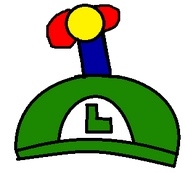 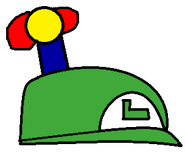 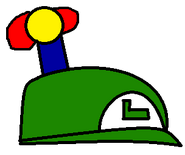