Leorich Slikk is one of Leopold's siblings in Useful's AGK Series. He usually likes to prank Leonard but sometimes, he is acting nice with him. He is also nice to Leopold and even on his side, unlike Leopold's other brothers.

Leorich Slikk is first seen in episode 1 when he is driving Leonard crazy, resulting on Leonard beating him up and throwing him in the kitchen.[1]

After hearing Leorich's scream, Leopold comes downstairs in the kitchen to protect Leorich from Leonard. After Leopold and Leorich got out of the kitchen, Sonic.exe slowly appears and tries to find Leopold but Leonard refuses to let him know where Leopold is, resulting in a fight. After the fight ended, Leonard gets out of the kitchen.

Meanwhile, Leopold and Leorich are listing to some music which annoys Leonard as well, forcing him to break the door to turn it off. In Episode 2, Leorich was screaming with Leopold and got beaten up by Leonard again, rendering him unconscious. Leorich woke up and insulted Leonard. Leorich then decided to play with Leonard on Leopold's PS1.

Leorich makes an apperence in BlueNewton's episode 45's comic edition where he was in the PVMAGKVIDEOS's AGK universe with Sim as his slave being forced to work. But Leorich recognized Leonard when he was his new brother since Sim captured him though their original universe. Leorich was Leonard's twin which they remember those good old days and helped themselves out.

Leorich appears in Episode 55 as the brother which being babysat by Leopold and Leorich from Harold because of his work at office. In Episode 56, Leorich fights Leonard with Leopold to stop revenge from Leonard, who prank him.

In Episode 57 & 58, Leorich appears along with his elder brothers.

In Episode 62, he reacts Leopold and Tailsko kissing along with his elder brothers and father (Harold Slikk).

In Episode 69, he appears when he suddenly escape the house while his brother, Leopold, was there asking for candies during Trick-or-Treat. So far, this is the only episode where Leorich appears in his AGK Series.

In Episode 4, he and Ivy defend Leopold from Leonard and Leonidas for for making a prank that they installed a virus on Leopold's computer.

In Episode 9, he and Ivy try to convince Harold and Karen to give Leopold another chance for staying up late and using his computer while grounded. This fails, and the video ends with Harold beating up Leopold while Mexican music plays in the background. 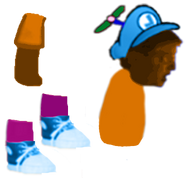 A Remake Version By Brad

If you want Leorich Slikk's voice here is the voice: http://www.mediafire.com/download/ujv9uq6o776s3no/Leorich+Slikk+Voice.mp3