Hitler's weirder and perverted brother. Mannerheim is an enemy of Leopold, but a bigger enemy of his brother, Hitler. 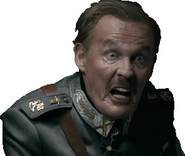 As seen in TheCrazinessCat's series

As seen in The Angry German Kid Movie
Community content is available under CC-BY-SA unless otherwise noted.
Advertisement