Mary is seen in episode 70 at the house in episodes 71 and 72. She is seen at Red Lobster's and at a hotel w/ Harold Slikk.

Mary is named Yelena Slikk and she hates when her husband Julian watches My Little Pony: Friendship is magic.

Mary is usually calm around her children, but hates Harold's guts, as she gets abused by him. She is seen in Episode 8 and Episode 9. She is voiced by Microsoft Mary.

Mary Slikk came here to visit the Slikk house. Leopold got so scared, he hides from her or she'll eat his brain but he decides to fight with her. After the fight, she got arrested for being a zombie

Mary Slikk has her same appearance, and she first appeared in Episode 2, AGK vs. Sonic.exe.

In this series, she was called "Marie Slikk," which is a French and Czech variant of Mary. It is confirmed that in AGK EP20, she will be of Swiss descent.

She is the wife of Harold Slikk. Her first appearance is at Episode 7.

In this series, her full name is Mariabella "Mary" Costello Slikk. She is Harold's wife, who is much more caring to her family than Harold. Maria can sometimes be very overwhelmed because of her husband's wildness, but is always satisfied with her marriage regardless of even the worst situations. Maria was born in Germany and is of Spanish and Italian descent. She is shown to do better at work than Harold who slacks off very often. Maria has also visited other European countries from time to time like France, Italy (her mother's hometown), Spain (her father's hometown), United Kingdom, and Sweden. 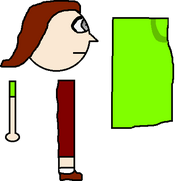