Mrs. Sukscox (IPA: [sʌkskɑks]; often called Ms. Sukscox or simply Sukscox) is one of the main antagonists and Leopold's teacher who first appeard in episode 2 of AngryGermanKid82's series [1]. She also appears in episode 7 of TheKewlOne96's series[2]. She usually catches Leopold playing games or sleeping in her class, and when Leopold finishes his tests, she gives him an F grade. Leopold laughs at her when she calls herself "Sukscox" because her name is pronounced like sucks c*cks.

In episode 52, Sukscox quitted her job since she had enough of Leopold's behavior. She later was told that Leopold had improved, and then she returned.

In episode 55, Leopold wrote an essay against Justin Bieber in his retake of his Stupid Quiz, ended up getting punished by Sukscox.

In episode 56, Mrs. Sukscox gave Leopold a bathroom pass and told him to be back in five minutes, but she didn't know that Leopold was skipping class, so she contacted Diknoz's office for this.

In episode 61. Leopold drew a picture of himself killing Sukscox during detention.

In episode 64, on Leopold last day of school, Mrs. Sukscox dismissed her class and Leopold was excited to have a great summer, but she requested Leopold to go to Principal Diknoz's office, where the Principal let Leopold go to Summer School. Later, Leopold's WTF bomb disguised as an escape key killed Sukscox along with Diknoz.

In episode 67, she was replaced by Mr. Stevenson.

In episode 71, Hitler created two terminator robots of Mrs. Sukscox and Principal Diknoz to get revenge on Leopold.

In episode 72, Fegelein used Leonard's USB flash drive which infects her with a virus that shuts down the terminator robot of her.

She last appeared on episode 32. where Leopold requested Hitler to blow up his school. The school was later blew up by Hitler's Pencil of Mass Destruction.

This is the only series that Sukscox stays alive throughout the time.

She doesn't have a physical appearance, but she is known as Miss Clark in AGK89's series as of Leopold's principal is named Mr. Suxdikz.

She threatens to report Leopold if he misbehaves.

She lets her students play games, as long as they have finished their work.

She is voiced by Microsoft Mary.

In episode 38, She is replaced by Hitler.

She doesn't appear in this series. Instead, Ms. Rachel Roger will be Leopold's teacher.

Instead of Microsoft Mary voiced her, she got voiced by Microsoft Anna.

Sukscox first appeared in Adventures episode 33, as Leopold's teacher who often got him in trouble. She was later replaced with Mrs. Damhead in S3EP7 and Mr. Penguin in S3EP12.

In Unleashed episode 6, The Trapper revealed that Sukscox was still alive, greatly angering Leopold to the point where The Trapper had to electrocute Leopold to make him stop screaming. 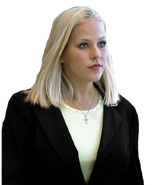 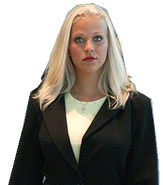