Getting angry at Leopold

Annabelle Bottleneck always wanted to be a teacher ever since she was a little girl. She thought she would the best school teacher in the world. She worked at an elementary school for 3 years, until she was laid off and her job moved over to a high school, only to find out that she would be working with a classroom where half of the class would be misbehaved students. Those being Leopold Slikk, Ronald Ramirez, Kaeru Otoko, Stephen Quire, and later, Jade's stepbrother Sean Turner. She likes her job at the high school. But gets angry with Leopold a lot. She also get angry even when it's not Leopold she is getting angry at. She also loves the school's principal, Principal Ashole. She actually has a crush on him. She currently lives with a 5 year old daughter.

She appears in the first episode of PSF's rebooted series. Leopold makes fun of her name and asks why "Bottleneck" is her name. She then makes everyone write a 10 page essay about the new school year. But she catches Leopold playing games instead of doing work and sends him to the principal's office.

In episode 3, she introduces Steve the Cat and Jade the Rabbit to the class. She assigns everyone to do research on dinosaurs. Eventually, She catches Leopold, Ronald, and Kaeru beating up Steve and Stephen constantly yelling at them to stop loudly. She sends both of them to the principal's office and Principal Ashole makes them clean her classroom.

In episode 6, she introduces Sean Turner to the class. She sends Sean to the principal after playing loud music in class.

She makes a minor appearance in Episode 10, where she makes out with Principal Ashole off-screen as Hitler breaks in dressed as Jigsaw from the Saw movies.

The original image of Miss Bottleneck 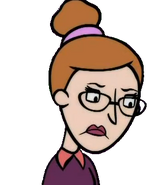