PrinceStickFigure was a Canadian AGK parodist who has been making parodies since May 2012. He went dormant on March 2013 after episode 16 of his original series. He came back with a rebooted series on September 2015. Overall, he has now been an AGK parodist for four years.

His AGK series revolves around the main protagonist, Leopold Slikk. It follows Leopold on the various misadventures he has.

As of now, he has retired from making AGK videos because he lost interest in Angry German Kid, due to lack of ideas.

He first joined YouTube on April 15, 2012 His first video was a crappy CD-i YouTube Poop called CD-i Mario and Zelda Get Cannon Pen1s'd, which was meant to be a parody of the Cannon Penis skit from the 27th Ian Is Bored video "Most Epic Vacation Ever" The inspiration really came from the 37th Ian Is Bored video. However, after seeing several AGK series from users like AGK82 and TheKewlOne96, he decided to make his own AGK series. His first episode, simply called AGK Goes To School, was first uploaded on May 24, 2012. It wasn't very popular. But, despite this, he decided to make more episodes of the series, hoping to get more attention. He also started to make a few Downfall parodies starting with Hitler Gets Blamed On The Bus, which was uploaded on July 19, 2012. His most viewed AGK episode from the original series is currently Angry German Kid's Christmas, which was uploaded on December 16, 2012. However, after episode 16 of the original series, he suddenly stopped uploading videos without giving an explanation why.

He finally uploaded a new video on April 16, 2015, announcing his return to YouTube. He also announced that he also removed all of his grounded video, and most of his other crappy videos in favor of better, more high quality videos. He also announced a rebooted series in this video. The first episode of the rebooted series was released on September 8, 2015. He didn't upload a new episode of the new series until January 19, 2016, as the episode was stuck in development hell. As the series went on, he announced new characters in the series, such as Ms. Bottleneck, Steve the Cat and Jade the Rabbit. His series has gained more views than the original series, with Episode 3 of that series being the most viewed episode so far. He currently stands at 4K Subscribers and 1.5M Views.

In Adrenaline21's AGK Series, he's from 2014 World, who goes into 2017 World to meet Leopold Slikk and his friends. Also, he introduces Steve and Jade on the beach to him. Leopold mocks Steve and Jade as 's pet cat and pet rabbit, as he disagrees to mockery. Leopold feels sorry about mockery about Steve and Jade, so joins into Leopold's crew of his World Tour Adventure.

He reappears again in season 3 as Missing AGK Parodists to be found but his mind has switched, and he wants Jade, Steve, Judy and Nick got killed by him, because of Jade and Steve's emotional feeling, he's weakened and defeated, then turn into ashes for good.

Only PSF's Leopold to be appeared on AGK: FM~The Movie~ because of so many characters from A21, GBL and IP101's AGK Universe. 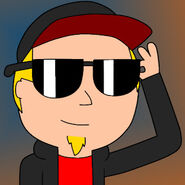