Principal Timothy Diknoz (born March 15, 1967) is the principal of Leopold's school in AngryGermanKid82's AGK Series. Leopold has been sent to Diknoz's office countless times by his teacher, Mrs. Sukscox for playing games or causing trouble. He Is Portrayed By Dan Richter

Leopold sometimes laughes at his name because it pronounces d*ck nose.

But after AngryGermanKid82, he appears once again in NeinCatAGK's Angry German Kid Series in Episode 2 but he was be killed by Alexander Romanov. Now Diknoz appears in various parodies. 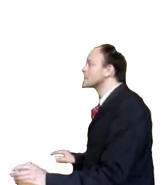 Retrieved from "https://agk.fandom.com/wiki/Principal_Diknoz?oldid=142030"
Community content is available under CC-BY-SA unless otherwise noted.