“When I created my wiki account, i did not have my YouTube channel yet. My first video was containing Far Cry 3 some Privateers are arguing with some Pirates, inspired my YouTube name to be Privateer Bouncher. Bouncher is because when i was younger, I loved DuckTales series, and I somehow thought that Bouncer Beagle were quite cool. when I was 9 I created a Roblox user, but the name Bouncer was taken so I created Bouncher (You can add me, but I might not respond as I don't play Roblox anymore) I uploaded some Roblox videos, but decided to change my Channel, removing all that contained Roblox, and created something that really fit my age. Causing it to only contain Far Cry, War Thunder, Trainz, Trains and Angry German Kid.”
―Privateer Bouncher

Privateer Bouncher is a Danish Angry German Kid Parodist. He's mostly known as his casual episodes, which doesn't contains the regular fight scenes and animé like Sailor Moon characters nor animals like Tailsko. He has then made redraws spirits' of Far Cry 4's Royal Guard Heavy Flamer and Heavy Gunner, and uses their qoutes as well. He is probably the first parodist to have Leonard, Leorich and Leonidas as Leopold's brothers in his series.

This is his 1st Season, Season 2 is under scripting.

Following December, the series will be rewritten and rebooted and will from late December to maybe early January, appear on a new channel called Privateer Bouncher Parodies. The intro will be updated but will keep the same soundtrack, also the characters will be bit older.

-Leopold: Age 18, will keep his original voice. His new favourite game will be Far Cry 5, but when raging it will most likely be War Thunder or GTA Online.

Leonidas: Age 20, will use Leonidas Slikk's voice. His new favourite game will be GTA Online, but when raging it will most likely be Call of Duty or Counter Strike.

-Leonard: Age 16, will use Leopold's voice, but bit pitched so it's still different to Leopold's, his outfit will change as well. He will have a Girlfriend called Michelle. His new favourite game will be Far Cry New Dawn, but when raging it will most likely be War Thunder or Counter Strike.

-Leorich: Age 14, will use Leonard's voice. He will look like he did in the first Season, but has the size as Leonard. His new favourite game will be Far Cry 1, but when raging it will most likely be Counter Strike or GTA Online.

-Harold Slikk: Will be his usual self.

-Mary Slikk: will be like in most other parodies.

--Jacob Slikk: Age 47, his persona and appearance is inspired from Far Cry 5's secondary antagonist Jacob Seed. Base spirit will be Leonidas.

--Joseph Slikk: Age 44, his persona and appearance is inspired from Far Cry 5's main antagonist Joseph Seed. Base spirit will be Leopold.

--John Slikk: Age 32, his persona and appearance is inspired from Far Cry 5's secondary antagonist John Seed. Base spirit will be Leonidas.

-Principal Diknoz: He will keep the same appearance and personality as in the old series.

-Royal Guard Heavy Flamer: Inspired from Far Cry 4 NPC character with the same name, he will be Leonard's main enemy.

-Royal Guard Heavy Gunner: Inspired from Far Cry 4 NPC character with the same name, he will be Leonard's main enemy.

The reboot series will be less random and more scripted. joke will appear and some offending words might be used, warnings will occur before start of episode.

Characters and reskins made by him.

Mark Purayah II, is a character that will feature in "AGK and The Albino Clones"

Leopold's Front Prison Shot. Notice his Prison number is 1706-2006. Converting it to DMY. So, it'll say 17th June 2006, which was the upload date of "PC Spielen" the original video that became popular later on as Angry German Kid. 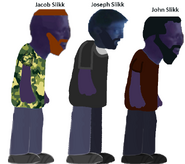 Jacob, Joseph and John Slikk. Cousins of Harold and Gerald.