He fights with Leopold when they first met, but then became friends who play Team Fortress 2 together. Unfortunately, after his debut episode aired, the series was cancelled.

In this series, Ronald's surname is spelt Ramírez, and he has a younger brother called Diego.

Ronald is Leopold's older brother, and his surname is Slikk.

His name is Leonardo, but his surname is Ramirez, and he is Leopold's cousin. The creator, IceManNJD2, intended to start his own separate ADK series, "The Adventures of Leonardo". His series debuted on September 14, 2014.

He did not make any appearances from episodes 86 until episode 140. Then, he appeared again some time later. Furthermore, his surname is never known. He was planned to be in episode 111, but this idea was scrapped. His voice clips were used for Eduard Oshawott.

His name is Pablo Sanchez. The AGK parodist TheLuigi755 believes that this may be a reference to the Backyard Sports character of the same name.

In one episode, he was purportedly killed by Sion Eltnam Atlasia, who was brainwashed by Alexander Romanov at the time. At the end of the video, he can be seen a M1911 Pistol from the fridge and he just dead.

He was one of the members of The Angry Gang, an organisation dedicated to foiling evil plans.

Ronald Ramirez is in Leopold's Class and they are both enemies. But there are many ways that could change. He works closely with Spencer Fernzich and lives about 20 Miles away from the school. Ronald Ramirez and Leopold MIGHT become friends in the future.

He is Leopold's Friend. And In some ADK Parodies, His surname is Slikk.

In S3 E13, Ronald, who loves the game Garry's Mod, moves to Germany from the Dominican Republic after his dad divorced his mom. When he tells Leopold that Unreal Tournament is gay, they get into a fight. Leopold tries to fight him again when Ronald shows him the infamous Hotel Mario cutscenes. They'll play Slender: The Eight Pages together sometime during the rebooted series Angry German Kid 2.0.

In the first episode, he has a little brother named Rodney and a father named Miguel, Rodney is just Ronald, but with Leonard's Hat. Ronald hates My Little Pony: Friendship is Magic and Likes Team Fortress 2

Ronald behaves same as Leopold and he's a bully sometimes.

According to this series, Ronald is a friend of Leopold and have similarities within it although he has some differences from Leopold.

I am Dead's AGK Series

Ronald makes his Debut in Episode 3 as a Teacher. In Episode 18 Leopold Slikk Murders Ronald. Austin Says he will bring Ronald back as a non-human.

In this series, Ronald Ramirez' middle name is Pablo as seen in Angry Dominican Kid gets error spammed. He is one of Leopold's friends and makes his debut in episode 1, then he makes another appearance in episode 2.

In this series, his full name is Ronaldo Antonio Ramirez. Ronald is witty, cynical, hotheaded, arrogant, obnoxious, and a coward. He debuts in AGK episode 2 along with Jake. Ronald thinks he's more mature than Yune, but that's false because he's scared of heights, freaks out when something doesn't go his way, and is a weakling on spicy food. He also doesn't believe anything about magic until he really sees it. Ronald is also a bully to Yune just like Samuel and Leonidas. Ronald also has pretty abusive parents who mainly punish him and his younger brother Rodney when they do something very bad, which is possibly why he often gets angry. 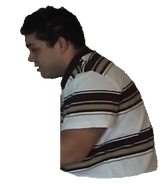 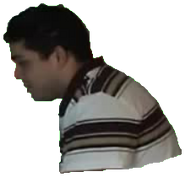 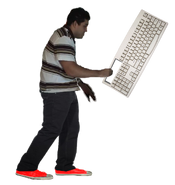 Ronald's walking animation made by MilesTheCreator