Sebastian "Alex" Alejandro Taito (セバスチャン・アレハンドロ・台東; Sebasuchan Arehandoro Taitō|Alt. 台東 セバスチャン; Taitō Sebasuchan) is a 16 year old and has been friends with Leopold for years. He notably appears in YumaSonic2016's Angry German Kid series. He likes to be with his friends, play games, make videos, call people on Skype, and more. He is also YumaSonic2016's main OC and persona.

Before meeting his cousin when he was 4 years old, he used to play a lot of games, watch a lot of Television, and went outside very often. He always used to play with Alexis everyday. Then he met a German kid when he was 9 years old while he was at school, and they didn't get along at first until they were 11 years old. By the time he was 14, he saw Leopold and Alexis getting bullied by a troublemaker, and Sebastian always stopped the bully either by scare, threat, or getting the principal to punish the bully. Sebastian has had to deal with Stephen Quire since November 2014 before Alexis went to school with him since September 2015. Sebastian has been a very active person until late 2012. Sebastian has been friends with Leopold since January 2014, and they used to hang out a lot until June 2014. However, Sebastian and Leopold used to prank Leopold's neighborhood a lot for the fun of it. The evening pranks were active until May 2014 when Sebastian said he was getting tired the pranks, plus he said that Leopold might get kicked out of the neighborhood if he doesn't stop the pranks. Now, Sebastian is a video maker since 2016 who has posted a lot of Instagram Memes and some YouTube videos. He makes Angry German Kid parodies, and Leopold doesn't seem to care at all.

Taito has black hair, brown eyes, and mainly wears a dark red shirt, a red jacket, black pants, and maroon shoes. He also has a blue cape and blue glasses which he is often seen wearing as well.

AGK in BND of Doom's Camping

Sebastian Alexander Taito is a very mature teenager who has many friends. He gets good grades at school, despite not really studying. He loves to spend time with his cousin Alexis. Sebastian likes to play Nintendo and SEGA video games and watch Spongebob, Dragon Ball Super, Soul Eater, etc. He always fights to protect everyone just like Leopold and Yuya.

He cares a lot about his friends and family. He likes to talk to AGKandvideomaker2000, AGKandRockman2001, Jayden Montoya, Travrinity, Ivan187, and more online. 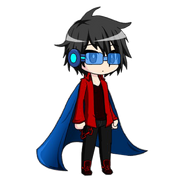