Being insane, mouse, headphone, keyboard, and monitor thrower, blaming on his brother, and having mental sickness about Nazism.
Stefan Kaczynski is the Angry Polish Kid who smashed his headphone and his keyboard and threw his mouse and keyboard to the floor and his PC monitor out the window. He also blames things on his brother.

The side sprite of Stefan Kaczynski 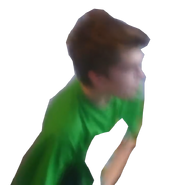 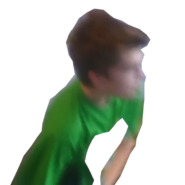