The Angry German Kid XD was an AGK parodist since 20th March 2015. He used Moho to make the animation, Sony Vegas Pro 13 to render, add music and merge clips each other! He retired because he became unmotivated lately. [1]

In 2015, Angry German Kid XD was uploading his episodes to his main channel (and known as MilesTheCreator) but due to some event, he had to make all his old episodes private and he started a new channel mainly for Angry German Kid videos under a new name in 8th October 2015.

After the intro is uploaded in the new channel, he was very hesitant if he should use Cansin13 sprites or an entirely new design. After a couple of months, he decided to design cartoon version of Angry German Kid characters because he thought that Cansin13 sprites are actually "overused" and he wanted to make something new and unique.

Between 2015 and 2016, the series was in production, he was thinking to make each rig a new design but due to time constraints he scrapped the idea. All the characters are based on Leopold Slikk's rig. The backgrounds was made in Sweet Home 3D making the backgrounds look 3D, this was heavily inspired from The Amazing World of Gumball. Due to the backgrounds looking 3D, he had to add the shadings, shadows and reflections so the characters doesn't look 'out of place'.

In 7th April 2017, he decided to change the designs completely since he have all the skills to draw better anatomy. The new rig features many many things that the old rig can't do. The art style was inspired from "Rhythm Heaven", a popular Nintendo game. 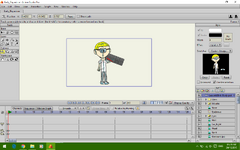 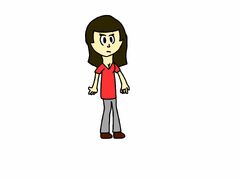 The concept art of Mary Slikk.

The concept art of Leopold Slikk featuring a line-less artstyle. 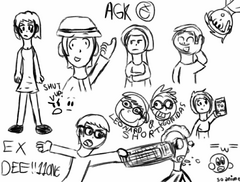 A frame by frame animation of Leopold Slikk attacking using his keyboard; made in RoughAnimator.

One of the new characters on this AGK series, the name is yet to be announced

The 2017 design of Leopold Slikk and he's walking.