James Rolfe, aka The Angry Video Game Nerd  (born July 10, 1980) (formerly The Angry Nintendo Nerd and often abbreviated The Nerd) is the title character of The Angry Video Game Nerd, portrayed and created by James Rolfe. In each episode, he reviews a different poorly made video game, complaining, overeacting and often shouting about either graphic and music quality or gameplay, but more reasonably the latter. His mortal enemies are the Nostalgic Critic and the infamous Irate Gamer, being just as popular as he is in the popular trade of reviewing similar media such as video games or television.

The AVGN has the appearance of a stereotypical nerd. He wears glasses and dresses in a white dress shirt, that is always neatly buttoned up. In the pocket of this shirt, he has a few ballpoint pens, which he sometimes throws. He also equips some of his NES accessories when fighting for armour and weaponry as Super NES Angry Video Game Nerd, where he sometimes doesn't wear his glasses.

The Nerd appears to have anger issues, sometimes going as far as destroying a game if he is angry enough. He is constantly drinking beer (either Rolling Rock or Yuengling). He usually flips off the game he is reviewing, sometimes in an slightly different way, such as wearing the Power Glove. He constantly swears and seems to like making rude remarks about games such as "Cowabunga? Cowa fucking piece of dog shit!"

He also appeared in pauladrian360's Angry German Kid Series as a recurring character. 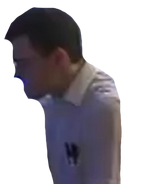 A backup for it.
Add a photo to this gallery
Retrieved from "https://agk.fandom.com/wiki/The_Angry_Video_Game_Nerd?oldid=140804"
Community content is available under CC-BY-SA unless otherwise noted.