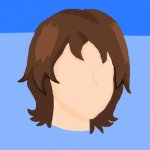 If you have stumbled upon this page, then allow me to say this: there is absolutely nothing for you to see here. Unless you want to read this...

Back when I was 14-years old, I really enjoyed watching Angry German Kid videos, mainly those by AngryGermanKid82, TheKewlOne96, Cansin13, AGKandvideomaker2000, and Atarster. They were my favourite Slikkers of all time, and I've wanted to become like them. At first, ideas were just basic (the same episode ideas as everyone had done over 9000 times), but as the years went on, I tried to come up with a storyline. It wasn't easy at first, but I stil got to come up with one... Now, I simply use those child-like ideas in order to put them in one final story. I'll let you all updated when it's complete. ;)

But I'm mostly (and sadly) remembered for having brought an abomination to this community and made it, along with this website, meet its downfall. And that is...Tailsko. Oh boy, where do I even start? Should I even introduce her? Nah, I don't think so. But let me tell you something: I begged Atarster to add her in his series, and I even had an idea in mind (which I now find it terrible). He did not like my idea, yet I honestly find his idea better than mine, even if it was a bit too...empty. At first, people didn't get phased by Tailsko, which I thought was okay (come on, do not lie to me). But she didn't last a couple of years when she was deemed "overrated", mostly due to her appearance. I don't know what you would have done (if so, tell me), but I decided to kill her off in CasperTheLawlBro2001's AGK series. I thought it'd work, but it turns out I was wrong when a manchild by the name of Aaron Doan whined over it. You can not imagine the mess I was being dragged into starting from August of 2018...

Right now, I'm deeply ashamed of all the things I've done while I was on that website. I let this wound bleed out to cause all of this, and I have no idea how to heal it. All this guilt and shame is consuming me, and I don't think I'll be able to sleep after all of this. I swear, I still see her when I try to go to sleep, slowly humping my crotch as she begs me to come back. I don't think she will ever leave my mind... And by the way, don't expect me to give that character a second chance. You guys have won.

Also, I have been starting to feel bitter about all of this. Like, I hate to shock you, but we have absolutely not fixed the damage caused by Atarster. We still have episodes with plots that are reused over nine thousand time, we still have people who keep useing ideas that are considered as "cliché", and we even have kids under 13 who are entering our community! Yes, one 11-year old kid is in our community! Aren't we violating the Terms of Use?! And Pony Video Maker, you did say long ago that AGK was never a Safe For Work meme in the first place. If so, then why are AGK videos now filled with rainbows and happy-go-lucky music? Huh?!?!

It's only a matter of time before this community collapses, save it now instead of spitting on Atarster and killing each other over nipples! If you don't, then don't expect me to return there. And by the way, I'm more popular in the Sonic.EXE community (as a voice actor and beta-tester) than Angry German Kid. Scream "CLICHE!!" all you want, I'm still getting interest into Sonic.EXE. Try to stop me if you can. :P

Thank you for taking your time reading this.

Fabrice Rockman (A.K.A. The Tailsko Faggot)

What do you want me to add now? There is nothing else for you to see here. Oh wait, maybe this photo.

You can leave now.

Retrieved from "https://agk.fandom.com/wiki/User:F.L._Productions?oldid=143031"
Community content is available under CC-BY-SA unless otherwise noted.