Yūne is a nice, caring, wholesome, and warm-hearted girl who claims to care about everyone she likes, no matter who it is. Despite her childish ways, she is also mature on most serious situations. If Yūne finds someone or something annoying or rude, she will brush it/him/her off. Yūne sometimes acts so foolish that people like Leopold, Jake, Ronald, Kaeru, and Yūya start to get annoyed. Like Serena, she is also known for her emotional side where she can’t help but cry whenever something seriously bad or highly nice happens.

When Yūne was a little girl, she used to always want attention. When Yūne moved to the United States in March 2007, the Tsukishima family met and quickly became friends with the Kizumi family. However, Yūne and her family left USA and moved to Germany in December 2008 due to American schools not feeling safe in Yūne's opinion. Then she continued getting bullied while she was in elementary school in Germany all because she had cat ears and a cat tail, and she came home scared and embarrassed everytime someone bullied her. As soon as Yūne started middle school, she was still getting bullied, but it slowly decreased throughout middle school. She also once got stuck in a tree in 2014 when she was a 5th grader and was rescued the same day. Yūne also met Leopold in 7th grade in which Leopold stopped the bullies everytime they bullied Yūne. At the end of 8th grade, Yūne wanted Leopold to be her boyfriend for always helping her and watching out for her. She had become emotionally fragile because of the torment she suffered as a young child.

Yūne appears with teal hair and teal eyes with cat ears and a cat tail. She also wears a pink dress and has an aquamarine necklace when she won a swimming contest when she was 14 years old.

Yune's attacks are made of Earth

“Nyaa!” - Makes this noise at any random time.

“I love you, my prince!” - When Leopold does something very nice for her.

“Baka!” - Reaction when someone does something stupid or wrong without even realizing.

"Notice me Senpai! LOL" - Trying to get Leopold, Kaeru, or Yuya's attention. 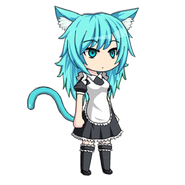 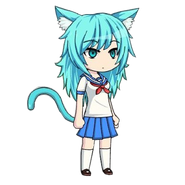 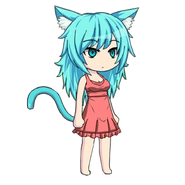